Razer Blade Stealth ultrabook has been introduced by San Diego-based Razer company. It specializes in gaming with an integrated Intel HD 520 graphics and a 12.5-inch touchscreen. Innovations such as the SwitchBlade UI and the manufacture of portable gaming laptops have enhanced Razer’s company to actually compete with the competitors. Blade Stealth is mainly made for gamers. 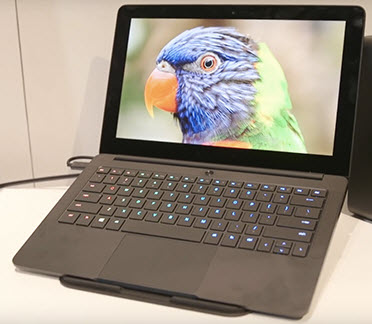 The ultrabook measures 0.52 inches thick similar in thickness to Apple’s MacBook Air. Blade Stealth has CNC-milled aluminum unibody design which is tight creating a premium hands-on feel. It also has a sleek matte black design with the companies on the lid. The overall artistic is simple with a few decorations aimed at tickling the fancies of gamers.

The downside is greasy fingertips will leave an undesirable patchwork of unevenly glossy splotches in the matte finish. You can avoid this by avoiding consuming fatty foods such as French fries when using the ultrabook.

Other features of Razer Blade Stealth ultrabook include 1 x Thunderbolt 3 (USB-C) charging port, HDMI 1.4b, a 3.5mm jack, and 2 x USB 3.0.  The Thunderbolt 3 presence is to deliver 40Gbps of bandwidth thus making it possible to drive two concurrent  4K 60 Hz displays. Rubber pads on the bottom of Blade Stealth run almost the entire length of the notebook.

Colors are lively and rich without looking artificially oversaturated, blacks are deep with uniform lighting and excellent contrast. Most probably it would be the brightest panel on a notebook. One downside of the display is the thick black framing that surrounds the panel.